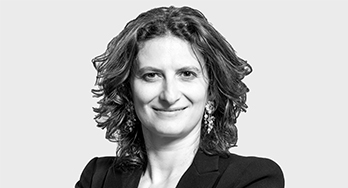 Federica is a partner at TALIENS Germany.

She is a German and Italian qualified attorney.

Federica focuses on all aspects of trademark, design and domain name issues (litigation, custom seizure, prosecution and portfolio management). She represents clients, in particular in the fields of automotive, cosmetics, food & beverage, telecommunications, media & entertainment/sports and fashion before courts and trademark offices. Federica has particular experience in proceedings before the Court of Justice of the European Union. She further provides advice on anticompetitive issues including on selective distribution systems.

Federica is regularly named as a domain name panelist for UDRP- and .eu-proceedings at World Intellectual Property Organization (Geneva) and the Czech Arbitration Court (Prague).

She publishes on topics of IP and competition law and is a national correspondent for Italy of the European Competition Law Review. From 2009-2012 she was a lecturer in European Law at University of Pisa – Scuola di Specializzazione per le Professioni Legali.

Federica studied law in Pisa (Italy) and Southampton (UK) and holds a PhD in International and European Union law from the University of Florence, Italy (2008), benefiting from a scholarship from the Max Planck Institute for Intellectual Property Law and Competition in Munich (2007). She also holds a Master in Public and International Management (Lecce, Italy).